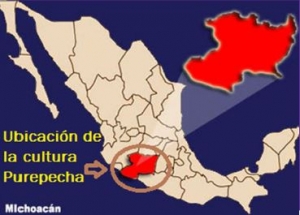 The purépecha, also known like tarascos for the Spanish, or michoacanos for the mexicas, were an important Mesoamerican culture, which they
managed to form an empire in the southwest of the current Mexico. They resisted the mexicas and they were never conquered by them, in spite of the
ferocious wars.

They were skilful craftsmen of the metals and supported social own structures up to the independence of the Mexican territory of Spain. They had the known capital, Tzintzuntzan (” city of the hummingbirds”), and they were constructing peculiar pyramids staggered in the shape of “T”. They had own language, which does not guard relation with any of other languages of the region, and that at present is spoken by approximately hundred thousand
persons of Michoacán state (México). His religion based on a trinity: Curicaveri, god of the war and of the Sun, his wife Cuerauáperi, goddess of the life and of the land, and the daughter of both, Xarátanga, goddess of the sea and of the moon. The universe purépecha had three levels: the world of the dead men or underworld, the visible world, in the surface of the Earth, and the world of the gods or celestial. The cosmos had five different regions (four cardinal points and the center) and each one was governed by a set of gods, who really are all Curicaveri’s different manifestations. Equal it happened with Cuerauáperi, that it had other four vital manifestations in four directions, and the own Xarátanga was a form of renovation of his mother. Therefore, really it was not a polytheistic religion, but the varied and multiple projection of two beginning. 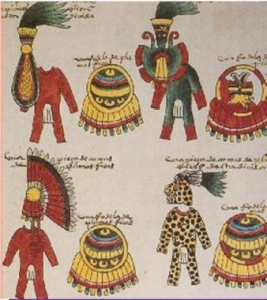 The name purépecha means “place where the p’urhé live”, and the inhabitants called themselves “purhé”, which he means “human being”, “person”. Really they worked as a federation of clans, and the generic name of purhé would be an affirmation of his condition of people. Recently one presented Angamuco’s discovery, an unknown city of the purépecha, which could have been investigated with a new technology of exploration laser.

The archeologist Chris Fisher, of the State University of Colorado, and his equipment of ten investigators have found that Angamuco was the major Mexican population between 1000 and 1300 of our age, with a population of hundred thousand inhabitants and forty thousand buildings raised in a surface of twenty-six square kilometres, constituting in addition a ceremonial center of the first order. The interest of this news is in the combination of magnitudes, antiquity and bias with which we value the ancient thing. The fact that an ancient culture was managing to raise a city with 40.000
buildings it must make us change our opinion brings over of his development compared to our one. A city as Malaga (Spain), in 2011 had 47.421 buildings, which leads us to admitting a degree of complexity into this city purépecha (that was not the capital of the kingdom) and in his own culture, which we do not manage to conceive in the ancient peoples.
https://elpais.com/cultura/2018/02/16/actualidad/1518781085_402213.html

The self-control relates to the intelligence… also in chimpanzees

The Test of the Candy is famous between the psychologists; it was designed in 1972 by the investigator Walter Mischel in Stanford, California, to do it with small children. Basically it is an experience to observe the levels of selfcontrol. 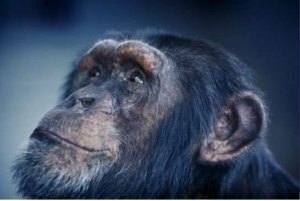 After a few moments of games between the experimenter and the child, to generate a confidence climate, the child is made alone opposite to a candy on the table, and it is said to him that if it is waited until it returns without having eaten it, it will give him more. Hereby, or with some another variant, Mischel was verifying the degree of self-control of the children. After fourteen years of doing a follow-up to the children of the initial experiences, he found a direct and clear relation between the capacity of self-control and other psychological capacities.

This way, which were not exercising the self-control, ended up by developing a low self-worth and a threshold of frustration more down, whereas those who could wait, were persons with a major academic success and socially more competent. The development of the will is behind cognitive skills.

There has been identified an impulsive response or “hot system”, without self-control and more emotional, that takes place in the amygdala, and a response with self-control, or “cold system”, more cognitive and reflexive, located in the frontal lobes and hippocampus. In the “hot system”, the stimuli dominate to the subject, and in the “cold system”, it is the subject who controls to the stimuli. In situations of stress, the “hot system” is intensified and the “cold system” decline. According to Walter Mischel, the impulsive response, without self-control, can be related to future disorders of health, as the appearance of trend to the obesity.

The innovation of this news is in that recently, Michael Beran and Richard Hopkins, of the State University of Georgia, they have realized the same experiments adapted to chimpanzees, and they have obtained a few results similar to the realized ones with children. That is to say, the chimpanzees that were delaying the response opposite to the candy, have given major punctuations in the test of general intelligence. It seems as if the aptitude to wait, of disabling an impulse, was allowing to improve in the capture of decisions.

The importance of this experiment with forty chimpanzees rests on the fact of corroborating an interesting relation, which on the other hand is said from the applied philosophy: the capacity of
self-control of the most impulsive and instinctive part of our “animal part” allows a better cognitive development and of social skills of our “human part”. Philosophically speaking, the self-control, about the impulsiveness, it improves our condition humanizes. Walter Mischel came to the conclusion of which the impulsiveness can manage to be controlled and to be educated. And the philosophy to the classic way also raises the self-control as a necessary condition.
http://www.lemonde.fr/sciences/article/2018/02/12/chez-le-chimpanze-comme-chez-l-hommele-self-control-predit-lintelligence_ 5255418_1650684.html?xtmc=chez_le_chimpanze_comme_chez_l_homme_le_self_control_predit_l_intelligence&xtcr=1 https://www.cell.com/current-biology/fulltex /S0960-9822(17)31676-7

More evidences of the symbolic thought in neandertals 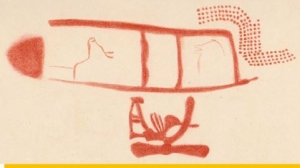 Paint the cave of La Pasiega. The stairs form has a minimal antiquity of 64.000 years. Other elements it is possible that were joining later.

Until recently, the authorship of the cave paintings always has associated the modern man (Homo sapiens). In 2012, there was discovered that some of the paintings of the Castillo cave (Cantabria) were 40.000 years ago, in the limit between neanderthals and sapiens. Also it was known that the neanderthals were painting the body to themselves and elements were using with possible symbolic premeditation (case of the use of flowers in burials, and the own act of the burial). But recently have been published two investigations that incline the scale definitively to the existence of a symbolic thought in Homo neanderthalensis, which would not be a sole right of the modern human beings, but previous to them and possibly inherited from same distant ancestor.

The first one of these investigations is realized on paintings of three different caves: Ardales (Malaga), La Pasiega (Cantabria) and Maltravieso (Caceres), and in all the cases one has discovered that some paintings have an antiquity of 64.000 years, that is to say, in epoch in which evidences are not had still of the presence of the modern man, for what they attribute to neanderthals. The method of dating used is named U-Th, based on the radioactive disintegration of isotopes of uranium in thorium, and is of great precision up to 500.000 years. It is relevant the fact that three caves are very distant between yes, which reveals that the practice of the painting, and the consequent symbolic connotations, they were something extended between the neanderthal population. 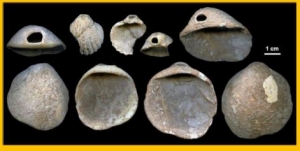 Perforated shells discovered in the sediments of the Los Aviones cave, with an antiquity between 115.000 and 120.000 years.

The paintings are simple. In Ardales they are concentrations of color, more or less elipsoides, located on projections of calcite; in La Pasiega they are two elongated parallel lines joined by orthogonal others to them, as if it was a stairs. And in Maltravieso there are, especially, hands. The used technologies have been different: in Ardales the fingers were in use, in La Pasiega, the fingers or it forms someone of paintbrush, and in Maltravieso a rudimentary airbrush was in use, with cannulas of bones or wood, on the hand rested on the wall, for projecting the painting. The used colors are the red one and the ocher, and it is known that they mixed the mineral, crushed pigments, with water.

What meaning would they have these drawings? It is not known, but provided that they are in accessible places of the caves, with a possible premeditation of is seen well by any visitor. Sinc Joao Zhilão, one of the investigators, thinks that they are symbols of a graphical language. Also it seems to be, given the diversity of locations, that the groups of hunters – recolectores were selecting natural spaces, as the caves, with some symbolic criterion. “It is like symbolic dimension gives to the natural architectures, as we do nowadays with many religious spaces or of another type. What is clear, and examples of it are La Pasiega and Ardales, it is that it lasted and was transmitted, since they have found inside the caves other figures of later moments “, adds Zilhão.

These evidences of the symbolic thought complement each other with another investigation published on the part of the equipment that published the article about the paintings. It is a
question of a work on the remains of decorated marine shells, found in the cave of Los Aviones, in Cartagena. They treat each other about shells of mollusks, decorated with yellow and red paintings, and the dating of two of them (realized by sedimentary and isotopic methods) gives an antiquity of 115.000 years, very previous to the most ancient found in Africa, and much more
behind to the presence of the modern man in Europe. Therefore, the finding of these shells, as well as the cave paintings, they consolidate the idea of that the neanderthals already had symbolic
thought. What does suppose this? The symbolic thought needs of the imagination, and this capacity is the great mental function that allows the comprehension and the knowledge, and the possibility of connecting with the sacred thing. Whenever there appears a more ancient discovery of tools, of objects or of accomplishments that suppose an effort of abstraction or of imagination, the idea is consolidated of that the process of humanization (the acquisition of the conduct and of the capacity of knowledge properly human) is much more ancient than it
believed himself in the 20th century, as support many traditions.