If this warning is irrelevant, please disable the syntax validation feature in the dashboard under General settings > Footnote start and end short codes > Check for balanced shortcodes.

A natural force enabling unity, coordination, and cooperation at all levels, from physical to complex human systems.

Abstract: Synchronization is defined as the concerted operation or activity of several elements. I.e these elements communicate and operate in unison. Synchronization is an observed phenomenon from the physical, through biological and to the human sociological world. In physics it is sometimes termed as spontaneous order as it seems to contradict the laws of thermodynamics that dictate the opposite, that nature should inexorably degenerate towards a state of greater disorder, greater entropy. Yet all around us we see magnificent structures – galaxies, cells, ecosystems, human beings – that all have somehow managed to assemble themselves. 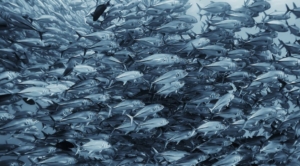 We may speculate that cooperation and consensus make sense to complex systems with higher conscience such as human interactions. The pervasiveness of this phenomenon at all levels though may indicate that there is something more fundamental to unity, coordination and cooperation, hinting towards more of a “law of nature” despite the possible contradiction to thermodynamics and statistical physics. The common features of synchronization phenomena from physics through biology to sociology is the distributed nature of the synchronizing elements, their means of influencing each other or being influenced by some common central element. Essentially, they must also have a common advantage from synchronizing with each other. This may perhaps be easier to explain in physical systems (e.g. due to energetic advantages) but may be more difficult to model in human sociological interactions. In this work we will suggest that cooperation and consensus are part of our nature even down to the lowest physical levels. We may speculate that we perhaps are supposed to strive to overcome the second law of thermodynamics and aim to organize and synchronize on the common good.

As humans we take for granted that we wish and are able to coordinate our actions and beliefs with other humans. We take for granted that we find pleasure in for example dancing with another person and that we are even able to align and harmonize our common steps. We implicitly attribute the ability and motivation to psychological factors and to some level of consciousness. It is less obvious that animals display synchronous behavior and even less so molecular biological and physical systems. Why would these groups, networks and systems with little to no consciousness have any cause or advantage in investing in maintaining coordinated, orderly actions, despite the fundamental laws predicting that they should disengage and deteriorate over time.

Entropy is traditionally related to as the measure of disorder in the universe and of the availability of the energy in a system to do work [1] D. J. Amit, Y. Verbin, “Statistical Physics: An Introductory Course”, World Scientific Publishing, 1999. There are many equivalent mathematical formulations and definitions of entropy, depending within what discipline it is described: thermodynamics, statistical physics, mechanics, machine engineering, ecology, information theory, computer science, chemical engineering, sociology, etc.  All of course essentially describe the same statistical physical notion stated in the second law of thermodynamics: the total entropy of any system does not decrease other than by increasing the entropy of some other system. The second law of thermodynamics is a statistical law, not a fundamental one like, say, conservation of energy. The entropy of an isolated system, could, in principle, “magically” decrease due to a random fluctuation, but the bigger the system, the less likely this is. The total entropy of the universe is hence widely believed to increase monotonically and constantly.

The second law of thermodynamics also places a limit on a system’s ability to do useful work as a correlation to the increase in entropy, i.e. the ability of a system to transfer energy to another system decreases as entropy increases.

Our basic physical intuition settles with that of ever-increasing entropy. We can all relate to the notion that any structure deteriorates and becomes more disordered over time. As a matter of fact, that any material inevitably crumbles and deteriorates over time, if not maintained.

It is possible for a system to decrease its entropy, i.e. increasing the order but that requires investing energy from outside of the system. Nothing in thermodynamics or statistical physics relates as to why a system would invest external energy in order to decrease its entropy at the expense of increasing entropy at another system. The term “spontaneous order” may even imply that it is believed that systems do not have a reason for decreasing the entropy through organization.

At a first glance it may seem that creating order emerges from some conscious will but as we will see this is not solely related to the level of conscious. In this work we will elucidate the subject through the notion of synchrony as expressed in a wide variety of the aspects of the cosmos.

Synchronization is a complex phenomenon being defined as the concerted activity of several elements. I.e these elements not only communicate, interact and influence each other but they also achieve to operate in unison ,at the same time or at a similar rate, or display the same behavior as a result of mutual or a common influence.

In physics there are many examples of seemingly disparate elements that should apparently have no reason for working in unison or for even having a mechanism for interacting and influencing each other, but they still do [2] S. Strogatz, “SYNC, The Emerging Science of Spontaneous Order”, (2003), ISBN 0-7868-6844-9. Huygens discovered that pendulum clocks for instance that are attached to the same wall will eventually synchronize their ticks even if they were initially completely or partially out of synchronization. This happens by minor vibrations that each pendulum exerts on the common matter that they hang on, the wall. 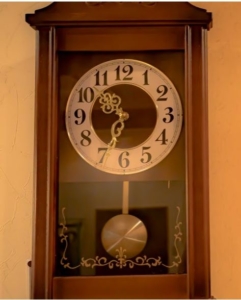 Synchronous rotation of objects is when an object takes just as long to rotate around its own axis as it does to revolve around its partner, such as the moon and the earth. This causes the same side of the moon to always face earth. They interact through their gravitational forces. They will stay so indefinitely unless external energy is introduced into the system.

Synchrony of gravitational waves can cause an ejection of huge boulders out of the asteroid belt and towards earth; the cataclysmic impact of one such meteor is thought to have wiped out the dinosaurs.

Synchronization gives some sort of physical advantage to the collection of synchronizing elements. It can be useful. Lasers are an example where engineering is cleverly utilizing the phenomenon of quantum phase coherence (a term for synchronization at the quantum level) of Bose-Einstein condensate matter in order to get an extremely concentrated beam of perfectly synchronized photons or light. This would not have been possible without the inherent synchronization tendencies of Bosons in the quantum realm. It’s an example where synchronization enables the principle of the whole being greater than the sum of its parts. Lasers are invaluable in medical applications, manufacturing, CDs and optical discs, scanning, printing, communication etc.

Electricity generators produce power by harnessing some form of natural energy source, for example burning gas or coal in order to create enough heat to boil water into steam, and then use the steam to rotate a turbine, or use the fall of water for that sake. The rotating turbine rotates magnets that in turn induce electrical power. This power is then drawn into the electrical grid by elements that consume the power such as light bulbs. In order to supply all the electricity demand of the modern world there must be many such generators with turbines in the grid that are all interconnected. A fundamental technical difficulty with interconnecting all the generators is that they must be synchronized to spin at exactly the same rate, even if they are separated by hundreds or thousands of kilometers. Without this synchrony power would go uncontrolled back and forth through the grid causing tremendous current surges and generators and cables would explode. Part of the solution came from the laws of physics. Electrical engineers found that generators connected in parallel had inherent tendencies to synchronize their rates of rotation. In other words, a parallel grid tends to be self-synchronizing: a beautiful instance of spontaneous sync, in the spirit of Huygens’s sympathy of clocks. The effect is easiest to understand for the case of two generators connected in parallel. If they ever happen to rotate at different speeds, the slower generator automatically draws power from the faster one, so the slower one speeds up and the faster one slows down, which corrects the discrepancy. In more physical terms, any disturbance that causes one generator to pull away from the other is opposed by corrective electrical currents that immediately begin circulating. Thus, the pair of generators tends to synchronize spontaneously.

The phenomenon of synchronization is displayed by many biological systems, and it plays an important role in these systems. For example, the heart of most living organisms is regularly activated by the synchronized firing of neurons in the cardiac pacemaker network [3] A. Daliot, D. Dolev and H. Parnas, “Self-stabilizing Pulse Synchronization Inspired by Biological Pacemaker Networks”, arXiv:0803.0241v2, 4 Mar 2008. The circadian pacemaker neurons that determine the day-night rhythm of humans and animals.

In macrobiology, individual animals routinely face decisions that are crucial to their survival. In social species, however, many of these decisions need to be made jointly with other group members because the group will split apart unless a consensus is reached. Consensus decision making is common in non-human animals, and cooperation between group members in the decision-making process is likely to be the norm, even when the decision involves significant conflict of interest[4] L. Conradt, T. J. Roper, “Consensus decision making in animals”, Trends in Ecology & Evolution, Volume 20, Issue 8, Pages 449-456. 2005. [5] I. Eshel, D. Weinshall, U. Motro, “On the evolution of altruistic cooperation”, Biomathematics and Related Computational Problems. Kluwer Academic Publishers, pp 279–282. 1988.

Examples of synchronization in the animal world include:

Synchronization in these systems is typically attained despite the inherent variations among the participating elements, or the presence of noise from external sources or from participating elements [11] A. Daliot, D. Dolev and H. Parnas, “Self-stabilizing Pulse Synchronization Inspired byBiological Pacemaker Networks”, arXiv:0803.0241v2, 4 Mar 2008.