NÔTRE DAME DE PARÍS: THEOLOGY OF LIGHT OR THE METAPHYSICS OF GOTHIC CATHEDRAL

“Through the sensitive beauty the Soul rises to true beauty, and from the Earth where she lay reborn in heaven through the light of her splendors.” Abbot Suger

Traditionally the period from 1130 to 1280 is called the “century of the cathedrals” in which more than 80 cathedrals were built in France.This new art and architecture, was called “art nouveau” or “new art” and also “French art”.

It is only from the XV-XVI centuries that this sacred architecture will be denominated by the Vatica itself with contempt “Gothic art”, in relation to the Germanic tribes that invaded and partly destroyed Gaul, the “Goths” or Goths, to accentuate the idea of a barbaric art.

The Church opted for the neo-classical style to make forget the metaphysical and theological contents of this style that took as fundamental ideas “God is light” (and not an anthropomorphic being) and the “Virgin has redeemed Eve’s sin”. 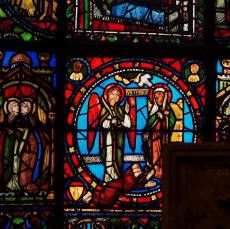 The abbot Suger of the Benedictine Abbey of Saint Denis de Paris, in the eleventh-twelfth century, is based on the writings of the Pseudo-Dionysius Areopagite, translated from Greek to Latin in the abbey, to conceive the cathedral as a theological work. He takes the idea of the Pseudo-Dionysus, who had compiled part of the work of the Platonic philosopher Proclo, that God is light and that each creature participates in it.

Dionysus, to Christianize the theology of light, refers to the Gospel of St. John, in which the divine Logos is conceived as the true light that shines in darkness and is at the origin of all things. “I am the light of the world; he who follows me will not walk in darkness but will have the light of life ”, Saint John, VII, 12.

For Dionysus, creation is an illuminating action and the created Universe cannot exist without light. If the light stops shining, everything that exists falls into nothingness.

He remembers that creation is a revelation of God, and that all created things are “lights” that by their very existence bear witness to the divine light and thus allow it to be perceived by the human intellect.

God is light and each one receives and transmits this light according to a hierarchy conceived by God (angels, saints, kings …).

God interposes images between him and us, which act like veils: the Holy Scripture is nature that presents us with images of God deliberately imperfect and contradictory.

This imperfection and contradiction, evident to our intelligence, are intended to awaken in us the need for transcendence, the desire to access, from a world of shadows and apparent images, the contemplation of divine light. Thus God hiding from us manifests gradually.

Physical light serves to create analogies with transcendent light so that the spirit of men awakes. Every object, every creature, reflects the divine light: everything then returns to God through visible things.

This conception is the basis of Gothic thinking. This establishes the connection between the metaphysics of light and the aesthetics of light.

In his treatise on metaphysics, Dionysius affirms that the divine light that irrigates the world ensures the union between created beings. For Abbot Suger, light is conceived as the form that all things have in common, the principle of simplicity that gives unity to the whole.

Dionysus and the theory of a double symbolism: the similar and the different.

In his famous treatise “The celestial hierarchy” distinguishes two theological images. First there are similar images whose model would be the figuration of God through an elderly man for being the father of the parents, which exists since before time. Hence his long beard representing wisdom, his golden throne because he is the king of the Universe.

Then there are the different images like a multicolored stone, a cloud or a luminous veil. It is these images that should be preferred to any similar image, he says, precisely because these images do not seek to define the indefinable nor write the indescribable and are content with a pure glow, a pure colored and evanescent mystery.

Because of its implicit rejection of objective forms, this “distinct” image is directed to the mystical dimension of each one, forwarding to the origin, proposing analogies that imagination and intuition must capture in an ascending approach.

To figure something is no longer to look for similarity, but to use light to indicate the presence of Christ instead of personifying him.

Abbot Suger explains that you can contemplate something divine in a simple brightness of matter, a multicolored jasper or the light refracted by stained glass.

It is the complementarity between the similar and the different that the abbot proposes through the new Gothic art: the opposites intersect as in a caduceus through the symbolic iconography of the new cathedral.

The gothic cathedral, expression of a metaphysics

In Suger’s thinking the technique comes in the background and serves to express an idea. Contrary to what is generally believed, the distinctive sign of this new art is not the ribbed or ribbed vault that already existed in pre-Gothic architecture in the Anglo-Norman style and was used to decorate certain chapels. 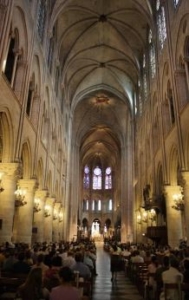 This technical artifice to support as a skeleton through the columns and ribs to the building, gives Suger the idea of emptying the walls of the cathedral and enhancing them so that an uninterrupted light shines. Thus, from the choir to the porch the light diffuses without obstacles, and this luminous cohesion reflects the unity of the Universe of which Dionysus spoke.

A mystical church is that is born with the Gothic style.

If in Romanesque art, light and matter are opposed as good and evil, the Gothic wall gives the impression of being porous. Light infiltrates and penetrates the building by transfiguring it; matter seems lighter and light more and more present.

All the architecture is conceived to empty the matter of the walls and replace it with the immense stained glass windows and rosettes. The gothic cathedral is transformed into a monument dedicated to transparency. Heaven and Earth enter into intimate communion thanks to the light that crosses all parts of the building.

Matter ceases to be impenetrable and becomes the substance carrying the verb light; the ascension of the arrows with its lightness defies Earth’s gravity.

For Suger, the Lux Nova, which he introduces into the Church, is associated with Christ himself. That is why it will qualify the windows with stained glass windows of “very sacred and miraculous”. Stained glass windows are like veils that hide and reveal the ineffable at the same time. To suggest the entire Universe is a veil illuminated by divine light.

The windows are not designed to be windows in a wall but as translucent surfaces that carry the forms of the sacred and that radiate throughout the building.

In this theology, beauty is not significant except to the extent that it reveals what is beyond itself: the ineffable.

In their exchanges Suger and Saint Bernard define the role of stained glass: “as the splendor of the Sun (the Christ) crosses the glass without breaking it and penetrates its solidity without piercing it or breaking it when it goes outside, thus the verb of God, the Light of the Father, penetrate the interior of the Virgin and leave her breast intact.”

The light explains the Cosmos, the Virgin the program of the Soul 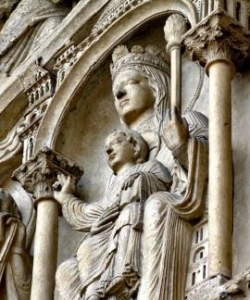 The Romanesque Virgin, called “Virgin of the Child in Majesty”, sits on her throne-chair, carrying an infant almost an adolescent, king of the world. It is the throne of Christ, the house of wisdom and primordial matter. It represents nature, and it was often called “the black virgin”.

In the Gothic era a new representation of the Virgin, “the white virgin” or “tenderness” is created. She is standing and carrying a baby assuming motherhood, love and life; she is crowned and can carry the rose or lis, as a symbol of matter that is spiritualized and rises towards the light.

It was considered the new Eve, which redeems the sin of Eve, and the people considered it the mediator par excellence between men and the Christ: the Marian cult spread in all layers of the population causing the alteration of Rome that was afraid of their own dogmas. 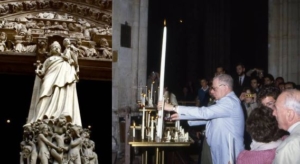 The Gothic will represent the Virgin in a final stage as Queen of the Skies, the Virgin of the Assumption, who brings the hope of a return to Heaven of all souls. In Gothic theory, the Virgin with her three transmutations indicates the program of the future of the soul in light.