THE TEOTIHUACAN LAND OF THE DEAD: THE COSMOS UNDER THE EARTH

Teotihuacan was one of the most important cities in the Mesoamerican territory. Its name is from nahuatl origin “a place where men become gods” or “a place where they were made gods; city of gods”. The first settlements are dated at about the year 100 before Christ and the first urban buildings are dated between the 100 and 150 after Christ. Its summit took place between the 200 and the 400 after Chrisr and its decline was at about the years 650-700 after Christ. Its influence was so great that it extended from the surroundings of the Valley of Mexico to the territory of Guatemala, Honduras, The Salvador and Nicaragua.

Several researches have talked about Teotihuacan urban space in abundance, since this one reflects a symbolical organization that represents an archetypical image of the Cosmos; the urban design as well as each building inside the complex, which has more than 20 km, were built with the intention of representing the order in the Cosmos.

The most emblematic buildings are the Sun and the Moon Pyramids; however, the first buildings in Teotihuacan were the Quetzalcoatl temple and the Citadel. The last one has an area of 160.000 metres and it is surrounded by a quadrangular platform with 15 pyramidal bases; in the centre of the Great Square the Quetzalcoatl is erected. 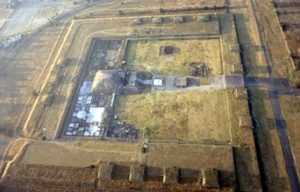 Aerial Image form the Citadel and the Quetzalcoatl temple.

In 2003 it was discovered that the drainpipe system in the Citadel had been closed with at least 50 skeletons of people that were sacrificed, decapitated and dismembered in a enclosure offering. The previous fact causes that this architectonic complex is flooded during the rain period, making a water mirror from where the Quetzalcoatl temple appears. In accordance with the constituent Mesoamerican myth, in the beginning of time everything was dark and quiet, the sky and the water were melted, then the creator couple joined their strengths and they made come out the Sacred Mountain from the Original Sea. In that moment, the counting of years began.

So the Quetzalcoatl temple is the physical representation of the Sacred Mountain, and this idea is increased by different discoveries such as the discovery of what has been denominated “ The Teotihuacan Land of the Dead” under the temple itself; this is considered one of the 10 most important in the world and it´s composed by a tunnel of 103 metres in length and 3 metres high, that is situated 15 metres underneath and it ends in 3 rooms under the centre of the pyramid.

The tunnel is a metaphor of the Land of the Dead. This world has its own sacred geography: the main entrance is at the west that is where the sun comes down; the Teotihuacan people put a metallic mineral dust with pyrites and hematite in the ceiling of the tunnel for representing the sky; they reproduced mountains, rivers and lakes that are connected to the original sea; at the east, where the sun rises, the tunnel ends in three rooms that form a cross all together, symbol that represents the movement, the four directions, the balance and of which inside a fifth unifying element, the fifth direction Quetzal-Coalt, the earth´s axis or axis mundi comes out. 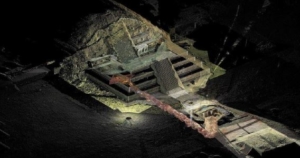 A graphic representation of the tunnel underneath the Plume Serpent Temple.

As the Mesoamerican cosmovision sees it, world is dual and it coexists in a binary opposition of complementary elements that are present at all the things in different proportions, in this way we have the opposites feminine-masculine, day-night, sun-moon, life-death. This duality can be seen represented in the malinalli; a figure of two ropes in twist, one rope is a rising waterspout, the other one is made of fire which comes down from the sky; when they are together, they symbolize the war and this one is the dynamism of the cosmos, the axis that connects the Land of the Dead with the sky, the visible with the invisible.

Another way of representing the axis of the cosmos is the Flowery Tree, which comes out from the Sacred Mountain that, according to the historian Alfredo Lopez Austin´s words, acts as a place where things can be buried:
“Inside the Sacred Mountain all the wealth is kept: the water springs up from it as underground currents that give rise to springs, streams, rivers or the ones that end to make the sea. The great cavity is the paradise of the Master of the Rain where all kinds of plants are always found green. They are seeds-hearts, germinal entities ready to come out to the world.”

It isn´t surprising that 15.000 seeds of different plants and pumpkin flowers were found inside the tunnel and far from it that it was just under the Quetzalcoatl Temple, because he is the one who offers the corn grain to human beings. In accordance with the legend of the suns, written in 1558, people haven´t got anything to eat and that is why Quetzalcoatl changed into an ant and went to the Tonacatepetl or the Mountain of Sustenance, where the corn was hidden by the tlaloques, helpers of Tlaloc, the god of rain. 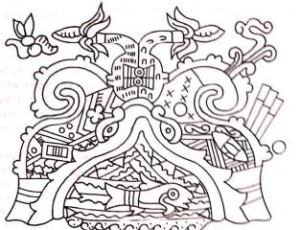 The Sacred Mountain in Olla of Nochiztlan, a mixtecan piece from Oaxaca. From the Land of the Dead come out all the food in a tree form.

The binomial Quetzalcoatl as Ehecatl, the God of Wind in conjunction with Tlaloc, is already present at the imaginary of the people coming from the centre of Mexico; the wind prepares the way for the arrival of the tlaloques or the first rains which will make possible the fertility of the earth and the keeping of the human beings. The nahuas from the area of Teotihuacan refer to Tlaloc as the one from which all the food come out and in some groups of the Otopame family there are stories about the moment in which the wind snake sweeps the way away for the God of Rain. The Otopame people are the great heirs to the mesoamerican cultures that were developed in the Mesoamerican cultures that were developed in the Mexican Central High Plateau and they still keep their traditions alive.

Sergio Gomez Chavez tells in an interview that more than 1000 tones of stones and earth had to be removed from the closed tunnel since more than 1800 years; it was found about 75.000 objects of different materials from among stand out conchs of 50 centimeters long, mayan pieces of green jade, seeds, insects, metallic mineral sphere, hule balls, etc. But without any doubt, one of the most important discoveries was having found liquid mercury, a metal of difficult extraction and not very common in the Old Mexico. This metal has been found in small quantities in some Mayan places of Central America but never before in Mexico and not in this proportion. Its presence suggests the use of this metal with ritual and symbolic aims, representing the sacred water.[1] A private interview to Sergio Gomez, director of the Tlalocan project, as it has been named the research about the tunnel under the Quetzalcoatl temple. 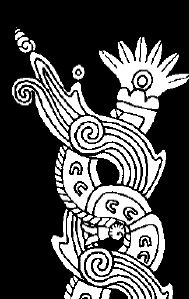 The hule balls found in the offerings inside the tunnel proves the hypothesis that a part of the Great Square was
used as court for the Teotlachco “the divine ball game”, that is to say, the performance of the ball game in a ritual way [2]Hypothesis expounded by Gomez and Gassola in 2015. Previously vestiges of courts for the ball game in Teotihuacan haven´t been found, a controversial fact due to the different mentions to that game in the walls of this archaeological place. In the Popol Vuh it is told that after having disturbed to the Masters of the Land of the Dead, the twin brothers are invited to play in a court at the outskirts of the Land of the Dead where they are decapitated just like their father.

The head of this one is placed over a plant and afterwards, he will spit in a goddess´ hand and she will give birth to the twins Hunahpu and Ixbalanque and she make them return from the Land of the Dead to the earthly world, just for looking for their father and face up to the Masters of the Land of the Dead in a game again. The relation death-life in this story synthesizes the idea that the Land of the Dead is the place where a new life is gestated.

Finally in an offering that went before the rooms, it were found five anthropomorph shapes (three feminine, one masculine and another one more incomplete and probably feminine) all of them made in green stone and set up with a great deal of pyrites mirrors and jade pieces; this has made the specialists suppose that these objects were carried in parcels by the statues, due to they bring to the mind the Strip of Pilgrimage that is contained in the Boturini Codex3 (that tells the migration of the mexicas from the mitic city of Aztlan to Tenochtitlan, where the priests-chamans and the carriers of the gods, called Teomanas in nahuatl, can be seen carrying the parcels with the sacred objects, that let them establish the place suitable for the new settlement. There are a lot of questions left about this topic. Did these statues represent to these priests-guides?

Can the four carriers be set up in the corners of the world for holding the sky when the terrestrial monster Cipactli was turned into the habitable earth? O Are they simply the representations of the ancestors of the Teotihuacan people?

The fact is that this discovery let verify what some documents about the Land of the Dead told: It has got its own sacred geography, here is where the seeds-hearts destroyed by the time are placed and inside the Sacred Mountain they wait for their appropriate opportunity to be spread in the land surface through the Cosmic Axis, that is the invisible channel that connects the Land of the Dead with the sky. So, the Plume Serpent Temple represents the First Mountain, the one that comes out from the original sea; and the ball game is the place for the sacrifice or sacred service, for the purification before coming into the cave, the place where the material remains rest but at the same time, it is the return to the sacred cave, to the centre, to the balance, to the origin. This is the continuous cycle of time, the eternal promise of life through the death.