Enoch is a biblical figure, a righteous and pious man, also known as “the seventh generation of Men” [Genesis 5, 3-33], the son of Jared and the father of Methuselah, and the only one except Elijah (Elias) who rose up to the Heavens while still alive . During the rise of the jewish mysticism- in the beginning of the first millennia- he began to be regarded as the human phase of what was to become an angel- Metatron. Metatron was one of the most important angels, residing in the seventh hall next to God, witnessing all the secrets of Creation and Divinity, and in fact- the highest authority in the Celestial Hierarchy except God himself. A fundamental concept in Monotheistic religions is the unity of GOD. There is one GOD, and ONE GOD ONLY. Nevertheless, it seems that the angels represent different aspects of divine power or authority and as such may be considered as the plural aspect of the one and only God (A polytheistic aspect of monotheism).
In fact, the Hebrew name for God is itself plural (ELOHIM, ?????? ). So God is One, but in the same time God is Many. In this sense the angels in monotheism (such as Metatron) resemble the gods in polytheism (such as Hermes).

The figure of Enoch-Metatron, across its varied depictions and representations, shows quite a few resemblances 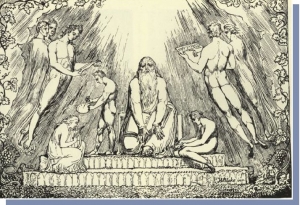 William Blake Enoch lithograph of 1807 (4 copies of the print are known. Only known lithograph of William Blake (lithograph was quite new and experimental in 1807), which illustrates Genesis 5:24 “Enoch walked with God, and was no more, because Dios was taken”.). Wikipedia.

to the god Hermes in his different aspects.

Enoch The Writer and Deliverer of knowledge

The most basic resemblance is the depiction of Enoch- in the more archaic sources- as THE writer, the deliverer of writing and knowledge. He receives from the angels the knowledge of Writing and Science, of Astronomy and Calendar, in order to deliver it to Men:

And he was the first among men that are born on earth who learnt writing and knowledge and wisdom and who wrote down the signs of heaven… he saw and understood everything, and wrote his testimony, and placed the testimony on earth for all the children of men and for their generations. [The Book of Jubilees, 4, 17-19]. Enoch “reads” from “the tablets of heaven” and gets secret knowledge of “what’s going on” in the celestial planes, and delivers it to humanity. In that aspect he resembles Thot-Hermes.

Another important resemblance to Hermes is the depiction of Enoch as an initiate.

In the days of the Jewish mysticism Enoch became a symbol of the journey of the initiate. The descriptions of the different Heavens through which Enoch moves became metaphors of inner experience.

In Heichalot Literature Enoch-Metatron testifies he was lifted to the Heavens to serve The Chair of Honor (the chair of the Lord) and was transformed: After all these things the Holy One, blessed be He, put His hand upon me and blessed me with 536O blessings. And I was raised and enlarged to the size of the length and width of the world. And He caused 72 wings to grow on me, 36 on each side. And each wing was as the whole world. And He fixed on me 365 eyes: each eye was as the great luminary. And He left no kind of splendor, brilliance, radiance, beauty in (of) all the lights of the universe that He did not fix on me. [Enoch 3, 9, 1-5]

Enoch is said to be granted the glamor that was taken back from the first Man due to his sin. Within Enoch this glamor reached perfection and for that he had to become an angel (since after the original sin perfection could no longer be reached in a human form). So he lived near the garden of Eden and after the glamor started shinning inside him he could enter the garden and he found the tree of life (“The Tree of Life” is also the name of the kabalistic system of the layers of reality / creation, and the knowledge needed in order to climb the stages of awareness). He smelled the tree and absorbed the life of it. Then angels came and taught him divine wisdom and gave him a book that was hidden inside the tree, and from that book Enoch studied the secrets of God.

In The Secret Doctrine HPB writes that Enoch was also known as Enos, Hanoch and Enoichion, and that The Book of Enoch was a “secret book”- “one that belonged to the catalogue of temple libraries under the guardianship of the Hierophants and initiated priests, and was never meant for the profane”.

Quoting from other writers HPB concludes that Thot, Hermes and Mercury belong all to the same category of sacred writers- recorders of occult wisdom. In the Quran the same function appears as Edris (the “Learned” or “Initiated”) and for the Jews- Enoch. HPB clarifies that esoterically Enoch and Hermes Trismagistus are identical.

The number Seven being attached to, and connected with, each of those primitive Initiators, as well as the number 365, of the days in the year, astronomically, it identifies the mission, character, and the sacred office of all those men, but certainly not their personalities . Enoch is the seventh Patriarch; Orpheus is the possessor of the phorminx, the 7-stringed lyre, which is the seven-fold mystery of initiation. Thoth, with the seven-rayed Solar Discus on his head, travels in the Solar boat, the 365 degrees, jumping out every fourth (leap) year for one day. Finally, Thoth-Lunus is the septenary god of the seven days, or the week… Enoichion means in Greek the “inner eye,” or the Seer; in Hebrew, and with the help of Masoretic points it means the initiator and instructor . 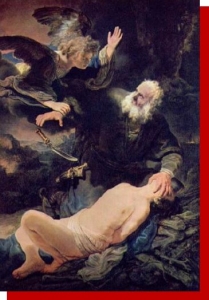 There are some other aspects of Enoch-Metatron that resemble Hermes though they are not as dominant in Enoch’s figure:

• His function as a messenger due to this mobility

• The assistance he provides to men in difficult quests

In other aspects there are also differences between the two figures:

Enoch is not depicted as light or swift in his duty of delivering knowledge, nor is he portrayed as a trickster or deceiver, or have any known duty concerning merchantmen or thieves, money or wealth. Though he is a kind of “middle man” and a bridge between the visible and invisible world, he is not involved in “making things flow” (at least “horizontally”… since he does create a vertical “flow” from the unknown to the known). He is also not depicted as a figure related to the “small things” or as having a main characteristic as “the harmony between opposites”.

To conclude, Enoch is seemingly related to the principle we regard as Hermes. He is the writer, giver of knowledge; He is the initiate and a psychopomp; He is periodically a messenger that moves between the worlds carrying massages and giving assistance to those in need. Interestingly, Enoch’s attributes can be paralleled to the attributes of Hermes before the Renaissance.