The Renaissance began in Cologne. How German mysticism brought forth a new understanding of man, of human dignity and a new world.

Summary: In the 13th – 14th centuries, Albertus Magnus and Meister Eckhart – inspired by the old hermetic tradition – defined human reason (intellect) as something divine, thus giving human dignity a new foundation. Over the next 100 years, the Dominicans trained in Cologne operated all the important educational institutions of the Holy Roman Empire and dominated the intellectual and philosophical life. These ideas, which were also disseminated in German, inspired the important philosophical-religious movement of the Beguines and Beghards and influenced all of society throughout the Reich/Empire, but especially in the areas along the Rhine river. The same ideas also reached Cusanus and Pico della Mirandola and later inspired the Renaissance. 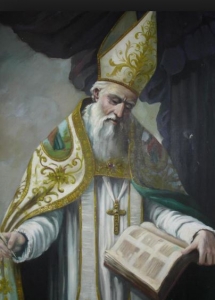 The Renaissance began in Cologne in 1248 when Albertus Magnus founded the Studium Generale of his Order in Cologne, which later became the University of Cologne. The Dominicans who were trained there for 100 years operated all educational institutions of importance and thus dominated the intellectual and philosophical life in the Holy Roman Empire. Albert and his disciples taught the dignity of man: “Our reason does not consider metaphysics insofar as it is human, but insofar as it is something divine in us. As Hermes Trismegistus aptly says in the book he wrote about the God of the Gods for his friend Asclepius, man is the link between God and the world.”[1] Albertus Magnus, Metaphysics I, 1.1. ed B. Geyer, Münster i. W., 1960, page 2. Therefore, human reason is also divine reason. Man can thus bring the best within himself to birth and also create a better world.

What a stark contrast to the hitherto prevailing Christian-medieval image of humanity, which Pope Innocent put in a nutshell in the 12th century: “Man is made of earth, received in guilt and born to torment. He acts badly, even though it is forbidden to him, he commits shameful deeds that do not befit him and puts his hope in vain things, the end of which is still uncertain. He ends in the flames or as food for the worms or he rots …”[2]Pope Innocent III, “On the misery of human existence” (De miseria humanae conditionis), 1195.

The Renaissance of the High Middle Ages

It was a fascinating spirit of optimism that prevailed in Albert’s time in Europe – a departure from the dark times of the Middle Ages, in which all the achievements of the perished Roman Empire were lost. Charlemagne had renewed the empire and the Ottonians and Stauffers had established the Holy Roman Empire of German Nation. It was the time of the Gothic cathedrals, whose architecture of light also brought back a luminous image of God. Ancient philosophical knowledge was brought back by the Moors and the crusades, enlightening the thinking of the most progressive minds in Europe. The Templars secured the roads and thereby made it possible to travel and trade again. And together with the Cistercians, they spread renewed spirituality and cultural knowledge about medicinal plants, agriculture, construction technology and much more throughout Europe. The dynamic of this era also becomes evident in the fact that between 1000 and 1350 around 3000 new cities were founded in the Holy Roman Empire. And “city air makes free”, because that also meant a say in citizens’ councils and was an essential pioneer of the reorganization of political systems.

Albert as a miracle of his time

Albertus Magnus was one of the first Homo Universalis of this era. He created a synthesis of Christian doctrine, the ancient philosophy of Plato and Aristotle and hermetic philosophy. At the same time he was engaged in the study of nature and today is regarded by many as the founder of modern natural science. Herewith he broke through the narrow medieval church dogma, which accepted only the Bible as an authority. Albert, in contrast, wrote: “In matters of faith and morality, Augustine has more to trust than Aristotle. When it comes to medicine, I put more emphasis on Galen and Hippocrates than on Augustine, and in matters of natural philosophy I rather trust Aristotle or another expert in this field.”

As a naturalist, Albert reprocessed the complete works of Aristotle and interpreted it for his time. Above all, he succeeded in overcoming the contradictions between the Christian-medieval world view and Aristotle’s view of the world. Not enough, Albert integrated into his educational system also the teachings of Plato and the Neoplatonists, as well as the natural-philosophical-magical world view, which was passed down through the works of Hermes Trismegistus. For this reason, Ulrich of Strasbourg, a direct disciple of Albert, described him as a divine being, a miracle of his time, and an expert on magic.

Hermetic philosophy, and with it Albertus Magnus attests to man a divine nature that most people are unaware of. He can regain his divine nature through the development of his intellect, which is an image of the divine spirit. If in the conception of the Christian early Middle Ages, only God was powerful and man was subject to him and nature and dependent on salvation through Jesus, people now began to consider man as powerful as well. He carries in himself a divine “Fünklein” (sparkle) as Albert’s most important successor Meister Eckhart would formulate it later. This little sparkle is the human intellect, that is, human reason or the higher part of the mind. It is our synthetic, imaginative or intuitive thinking, in which our values and ideals are located. And precisely this intellect is the link between God and the world.

With the help of this inquiring reason, man can and should explore oneself and nature. By exercising reason in a virtuous life, it is possible for all human beings to become aware of one’s true dignity and to refine nature. From an object, which is subject to the mercy of nature and God, man evolves into a second creator, who can responsibly shape himself, society and nature, thus advancing the creation and the evolutionary process respectively.

He who reflects on himself and becomes aware of his divine core, hears the voice of God, says Meister Eckhart, putting into words an esoteric-philosophical understanding. Not only Jesus is a Son of God and thus a Redeemer of men, but all human beings are children of God, and through introspection they can make contact with this inner God and redeem themselves: “The Father [God] gives birth to his Son without ceasing, and I say even more: He gives birth to me as his son and as the same son. And I say even more: He does not give birth to me as his son; he gives birth to me as himself and himself as me and me as his being and as his nature.” Man conquers his true self through the exercise of reason, “in the natural light of the rational soul”[3] Meister Eckart, German preachings. The man who has come to himself is, according to Heinrich Seuse, a perfect man, a Homo Divinus, as Albert, Eckhart and Berthold von Moosburg call him.

The characteristics of German mysticism can be summarized as follows:

The consequences of the new world and human image 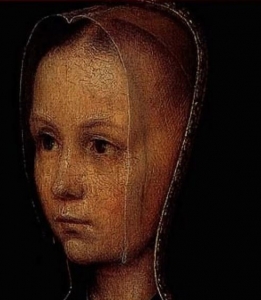 While this “German philosophy” was only scarcely noticed in the academic centers of France and Italy, it had an unbelievable effect on the laity in German. Especially along the Rhine river, but also in northern Italy, southern France, in the rest of Germany, the Netherlands, Austria, Bohemia and Switzerland it fertilized the movement of the Beguines and Beghards. That’s how the members of a Christian community were called in the 13th century, who took no religious vows and did not live in retreat. The female Beguines and male Beghards led a religious, unmarried life in community, in so-called Beguine and Beghard convents or houses. The goal of the men and women, who called themselves brothers and sisters, was the realization of a life following Christ. To this end, they eagerly studied and discussed the teachings of Meister Eckhart and other successors of Albert. Unlike monks and nuns, they took their vows for a limited time only, as it was legitimate to retire from the community, to marry, and to build a bourgeois life. 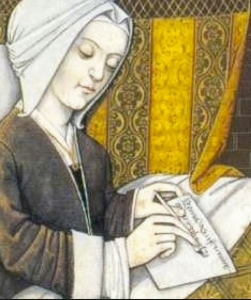 Beguines and Beghards  lived in their houses under the direction of a lady master or a master, who was chosen from their midst mostly for a year. The communities were self-sufficient. Beguines worked as midwives, teachers, silk weavers, spinners and washerwomen. In the drapery and coat of arms embroidery they gained a high reputation with the quality of their work. They cultivated vegetable gardens and baked bread. In addition to prayer, they also devoted themselves to works of active charity, such as nursing, caring for solitary/lonely persons, pastoral care and education as they also operated girls’ schools. Some well-known mystics such as Mechthild von Magdeburg and Margareta Porete were Beguines.

In 1299 there were 88 Beguine convents in Cologne, some decades later even 169. The convents were often the size of village settlements and housed up to 60 Beguines. In the late Middle Ages Cologne had over 30,000 inhabitants, and thus it was the fourth largest city in Europe after Paris, Ghent and Bruges[4]http://www.frauenwissen.at/beginen.php. 6.2.2017. Extrapolated this means that 8 – 20% of the Cologne women were Beguines. This allows conclusions about their influence on cultural, social and economic life.

The opponents appear on the plan

The “divine dignity” of man and the dynamic spirit of optimism in the Holy Roman Empire were a thorn in the side of other ecclesiastical circles. Already in the 13th century, there was a group of Dominicans who did not want to see the Hermetic, the Magician and the Wise in Albert. They endeavored to reduce him to the naturalist and predecessor of his pupil Thomas Aquinas, whose synthesis of religious belief and Aristotelian rationalism soon thereafter became the doctrine of the church till today. Master Eckhart was accused by the Papal Inquisition and after he had died during his trial in Avignon some of his teachings had been subsequently condemned as heretical. The Beguines and Beghards did not fare any better. Since 1307, they have been opposed and persecuted by parts of the Church. Over the decades, innumerable Beguines and Beghards were condemned as heretics and murdered.

The return with Renaissance and Humanism

The societal stimulus that had emanated from the German mysticism was thereby pushed back or stopped. Not so its ideas, which were carried on by other representatives of the German mysticism and thereby reached Nicholas of Kues. By the latter, they also influenced Pico de la Mirandola, who had read Albertus Magnus’ works and was familiar with the ideas of German mysticism. His writing “On the dignity of man” became the Magna Charta of the Renaissance.