Isabelle Ohmann
During our Hermes working weekend in the east of France, we discovered a curious statue, the Anguiped Rider, in the? Strasbourg Museum, and, not far from there, at Grandfontaine.

A widespread class of statuary 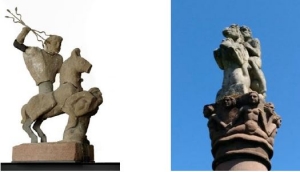 We observed the presence in North-Eeast Gaul, in Burgundy and particularly between the
Meuse and Rhine, of a great number of these very characteristic statues where the rider seems to confront a monster with a serpentine tail, the giant anguiped.
The subject, thoroughly original, and confined to Gaul and the Roman period, and its wide
distribution, as well as the singularity of the composition, gives support, for some, to an
indigenous origin, the culmination of an early tradition.

A Highly developed and coded model

In spite of its widespread geographical presence, the model has few variants. The Anguiped Rider group consists of a complex monument, normally assembling the following elements:

Complete reconstruction (in colour) of a Jupiter Colum at Schwarzenacker

 a lower pedestal, a four-sided stone of which each face represents a divinity (or two) in bas-relief, sometimes with with a dedicatory inscription consecrating the whole column to Jupiter.

 this base is sometimes surmounted by a polygonal stand which, when there are eight faces, is decorated, with the busts or figures of the seven planetary gods (Moon, Mercury, Jupiter, Venus, Saturn and Sun), the eighth face carrying the dedication.

 a bole of great height (up to 11 metres), covered with the fragments of pine cones, or with superimposed leaves, or decorated with overlapping vine leaves of Dionysiac inspiration.

 a man, often bearded, with coat flowing in the wind, sitting astride a rearing horse whose forelegs rest on the shoulders of an anguiped monster and the hind legs on the ground. The rider has his right hand raised so as to throw the lightning (or sometimes he carries a wheel).

 The anguiped monster, with a masculine face, facing in the same direction as the rider, (in many cases to the East) tries to rise up between the horses’s legs. The lower part of his body terminates in a serpent’s or dragon’s coiling tail. It is to be noted that the anguiped itself, ordinarily described as a giant, is most often in proportion to the size of the rider. The term anguiped can be traced back to Ovid (Metamorphosis I, 184). 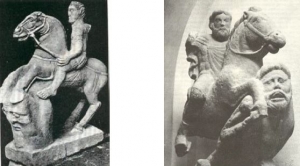 The Cult to Jupiter Taranis

The riding figure is associated with Jupiter, as the inscriptions testify. This kind of representation is, however, Gallic.

In the Celtic world, of which Roman Gaul was a part, Jupiter, the latin god of the heavens and of lightning, was assimilated with the Celtic Lightning god, Taranis.

A Cosmogonic interpretation
A first hypothesis sees in this group an allusion to the victory of Jupiter over giants, sons of the earth, who tried to take over Olympus.

For Berthe Rantz, the monument is of gigantomachy heritage. In combat, giants traditionally wrestle with celestial powers, evil powers which must be combatted, grounded, annihilated. «On the Pergamon altar (180 B.C) gigantomachy shows giants and anguiped monsters … As a reminder of their chthonic nature, giants are increasingly provided with legs of a serpentine character»

Claude Streckx highlighted the importance of the fact that the Jupiter on the Anguiped group is generally erected on the pinnacle of a column which is assimilated with the cosmic tree, referred to in the indo-european world and beyond.

According to a second hypothesis, this monument would symbolise the triumph over the Barbarians and the re-establishment of order and harmony by Jupiter as emperor. This has the advantage of accounting for the chronology and geographical distribution, concentrated on the border regions threatened by the Germans. The dedications to Juno and Jupiter on these votive monuments would give them an imperial ethos.

In support of this hypothesis is the fact that the monument is rarer in the West and the South of France than on the border (the limes) regions, where it can be replaced by a naked Jupiter on foot, commanding a crouching anguiped with his left hand.

An Agrarian cult of Celtic origin

Finally, a third interpretation: an agrarian cult, for the protection of agriculture with homage to water.

The rural character of these monuments (remnants of rider columns have been found in farms) and their exclusive presence in ancient Celtic territories, would pre-dispose some to the idea of a fertility cult of Celtic origin.

Taranis/Jupiter, as master among the Celts of the seasons and of atmospheric phenomena, projects lightning to earth to provoke rain and spring water. Using this interpretation, the giant anguiped would represent humid earth, the subterranean world upon which Jupiter launches his lightening.

It seems that a good number of these columns were erected near to thermal waters, to springs or lakes used as a places of worship.

According to Celtic mythology, lightning strikes were not brought forth at the whim of a god, but had to be motivated, hence the presence of the anguiped. This initial murder would seem to fit with indo-european mythology in a wide sense : a storm god pursuing the serpent.

Taranis and the Anguiped would then merely be the Celtic version of the myths where Zeus, Perun and Perkunas, Thor, Indra and others attacked divine serpents.

According to Contenau it forms part of the images from the East at the beginning of the first millenium B.C. Michaël Tonon develops a hypothesis which could overlap the foregoing interpretations. « We consider that the Jupiter on the Anguiped myth is a Celtic link between the very ancient indo-european myths (known among the Vedic Indians and the Hittites) and the myths which can be found in Christian hagiography. » It reminds us, among others, of the battle between Indra and Vritra whom he kills with his lightning. « Vritra, who etymologically signifies Resistance is the reptilian demon who, by his passiveness and inertia, obstructs the heavenly waters, preventing their flowing as rivers, and dries out the world. »

Michaël Tonon, in comparing these myths with the Hittite myths and those of the Greek giants concludes : « that at a very early age (prior to 1200 B.C.), there was an indo-european myth in which the fighting god, the god of lightning, was the main hero :

So as to permit the flowing of waters, or de-frosting, the hero warrior kills the monster and possibly opens up the earth. The result is the free flowing of rivers, without retention of any kind.

The myth would seem to be a Spring myth, the return of the cycle of vegetation recognised as the consequence of the thawing of frozen waters: the melting of the ice in lakes and rivers, the thawing of the winter snow covering, the thawing of frost. (One is reminded also of the Frost Giants, among the Scandinavians, which Thor regularly encounters in battle.) In India the myth is also seen as a fight against drought, the waters having been drained as a result of their obstruction by the monster. These two interpretations are not contradictory and arise from the same belief in a dragon which impedes the waters, either by freezing or by « mechanical » obstruction of liquid water.

In this context, we consider that the figure of Jupiter and the Anguiped is a Gallic illustration of the dragon water obstructor:

*Taranis/Jupiter with his lightning fights an anguiped or a trunk-man which, in the western hagiographic tradition, in most cases becomes a dragon. Taranis, as Jupiter and Indra, is the king of gods.

Evidently he conquers the anguiped, because it seems to evade, is knocked over by the horse, and is on the point of being finished off by the lightning.
The statue is situated on a column evoking the summit of the mountain from where Vritra withholds the waters. Siren-like figures, representing water and encircling the anguiped, can be seen on certain statue-groups.
Furthermore, we have proof that the pattern of liberated water existed in Celtic countries and therefore that the pattern of the god releaser of rivers was known by the Celts. In fact, we found a trace in an Irish text, the Siege of Druim Damhghaire, when Mog Ruith returns the use of water to the Munster people.

From Taranis to St George

This myth was subsequentely subjected to Christian recuperation with the myth of St George and the dragon.

« At the turn of the 19th to 20th century James George Frazer in his major work The Golden Bough compiled an impressive number of european and world folklore themes. He dedicated a full chapter to St George, whose feast day is 23 April, where he is at the heart of rites intended to favour the oncome of Spring, to avoid the freezing of crops and to ensure the good health of the livestock about to leave the stables at that period … St George retrieved (from God) the golden keys, that is, sun-rays, in order to thaw the ground, and allow both water and dew to become liquid and to flow.
The direct connection between Taranis on the Anguiped and the western dragonslayers is also rich in meaning. It signifies a « soft » christianisation of Gaul, taking into account the important myths through the medium of devotion to saints. It also means the continuity of Celtic belief (perhaps in the form of folklore) up to christianisation. Taranis seems therefore quite close to his distant Indian cousin : like him, he vainquished the Anguiped, and like him he experienced an evolution, taking him from the state of warrior up to sovereignty of gods. » (Michaël Tonon).