The Chrismon, anagram of Christ and the colden number

Several years ago, when I was preparing material for the book Initiation Journey of Hypatia, I found a surprising fact: the arithmetic relationship between the Golden Number and the anagram of Christ, the so-called Chrismon: symbol, with which he was represented from the First centuries of Christianity to this day[1]We then introduce figurations at different places and times. The order is as follows:*Crismon’s Villa Fortunatus of Fraga (Huesca). Mosaic of the main hall (4th century). *Wagon wheel in the … Continue reading

The Golden Number, Divine Proportion or Golden Section is one of the secrets of ancient art and mathematics, and to which both Euclid and Plato refer. But they never specify how to find this Number that rules Nature. It is also one of the keys to Ancient Art (Egypt, Greece, Rome, China, India, etc.), besides being the one that allows the construction of the Pentagon star, one of the great secrets of the Pythagorean Brotherhoods. This number indicates the proportion that exists between two magnitudes, so that the smallest is to the largest, such as the latter is to the sum of the two. It is easy to see – now, but not so much in ancient Greece where there were no adequate mathematical “tools outside the temples ” – that this number is the solution to the algebraic equation: X-X-1=0
And fulfills the astonishing property that x = 1 + 1 / x, with the value of

1.618033988749…., a number that Euclid, without specifying which, proved to be irrational, that is, with infinite decimal numbers, and which cannot be expressed as a fraction of two integer numbers. As a continuous fraction, it is expressed as follows:

The limit of the ratio between two successive terms of the Fibonacci series 1,1,2,3,5,8,13,21,34 …. -in that each number is the sum of the two preceding ones-converges on the infinite in the Golden Number. This series, and the Golden Number, which they generate, rules the whole Nature, twining, in a certain way, the arithmetic and geometric progressions.

This Number, Φ, is, along with PI, the most sacred number of antiquity. PI, (π) is the relation between the circumference and its diameter and symbolizes the process of birth, of gestation, the creative power that gives rise to the Cosmos, which dynamize it. Whereas the Golden Number, called Phi, (Φ) by modern Mathematics is the Power that structures it, harmoniously linking the parts with the whole. Everything that exists is divided into harmonic parts and at the
same time, is part of a harmonious whole. This number, thus, binds the infinitely great with the infinitely small in a harmonic series also infinite, but ruled by this Divine Proportion: It is the Reason which ideally and geometrically rules the entire Nature.

Φ It is therefore the LOGOS, the Word, or Intelligence, the Divine Architect who gives shape to everything that exists, always joining the manifold to unity.

The truth is that we already knew the importance of this number in Greco-Roman civilization, but not that there it was to be considered the Word, the Platonic Logos, the Deity that is Pure Will, Love-Wisdom and Intelligence, and that it Becomes the Law, the Energy and Life and the Forms that rules Nature in its fullness.

When the educated Christian philosophers worshiped Christ, they made it to this incarnated Logos in flesh and blood (that is, in nature and in human heart, of the whole of humanity and since it was born as such, eighteen million years ago according to hermetic doctrines). And although this we already knew by some Fathers of the Church like San Jerónimo, the definitive and astonishing proof is the following one:

The Chrismon can be decomposed logically and naturally in the following letters of the Greek alphabet: 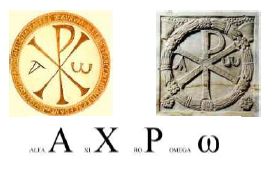 As in ancient Greek mathematics our numbers or figures did not yet exist, for them the numbers were these same letters with the following correlation: 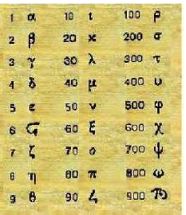 And remember that the Greek alphabet is the following, with uppercase and lowercase letters: 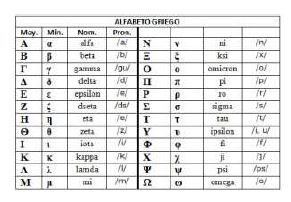 The Chrismon symbol is older than the Christian’s use of it as an anagram of Christ (KR, of Christ, which is the Alpha and the Omega). The S and T that appears in some medieval chrismons were incorporated several Centuries later, and was a symbol of the of the Caesars’ Roman Religion, an extremely sacred symbol, used, for example, in some Roman coins, as it tells us the priest and doctor in Classical Philology and Patristic Theology Manuel Guerra in it’s Romanesque Symbology: Christianity and other religions in Romanesque Art, who dedicates a whole chapter in this work, to the Chrismon.

And now we know that the Chrismon was also, as explained, the symbol of the Creator God, of the Logos who gives form and vivifies matter: the Universal Spirit, Son of the Unnamed Mystery, Universal Spirit whose presence is easy to perceive in order and harmony of nature, from the immense to the smallest, from its fractal geometry to its evolutionary programs[2]Always remembering, as scientists and philosophers say, that ontogenesis reproduces phylogenesis.
When Christ, of historical character [3] Even if we do not have a single solid historical proof of his life in a concrete space and time , became the incarnated Logos it was necessary to represent him with this geometric and numerical symbol of the Logos, the Chrismon, the Golden Number, the 1618.

The Anima Mundi that is close to God, and that is God, Alpha and Omega, Beginning and End of this Universe and therefore, everything that is born, lives and dies.