Castulo or the power of the tale

When one looks out to the plain where the city of Castulo was located, after passing the small promontory that is in the place of the walls, can not avoid some disappointment: in their eyes appear almost seventy acres of rolling hills and plains covered herbaceous communities without trees, a few ruins of recent agricultural uses and a modern structure under which the mosaic of love, one of the castulonenses archaeological treasures are. At ground level are a few groups of stone buildings and numerous excavation pits scattered around the place. And in the background, emphasizing on a hill, the ruins of a small medieval castle. Surprisingly, the third most mentioned city in the sources of Roman Hispania is dispatched so quickly with his eyes.
Yet Cástulo fascinates because it contains an unbroken history from the late third millennium BC to the fifteenth century. For centuries it was relevant, and was established in one of the most important cities of the Roman Betica , and was the capital of ancient Oretania Iberian and point where the precious mineral extracted in the nearby Sierra Morena to the rest of the world accumulated before known since Neolithic times. This continued importance was that it had a large population, grandiose buildings, harbor walls and everything that a city could need. However, Castulo devouring itself; continually it is destroyed and recomposed. And finally, in its decline, it was dismantled systematically to supply stone blocks and development of nearby Baeza and Ubeda.
There are historical places where the remains of his past appear clearly: epigrams sets scattered among capitals and columns and arches, remains of temples, walls, public scenarios, remains of necropolis and mausoleums, from spas and driveways. The presence of the past is evident. However, although it may seem paradoxical, transit through these more explicit archaeological sites can be surface: curiosity is satisfied sooner, because who comes to contemplate these places quickly sated by abundant visual information it receives. Merida, Itálica or Baelo Claudia are examples of this type of archaeological sites, where a walk among the ruins visual impact on the traveler.
By contrast, in places like Castulo, where no one remains so obvious to the layman, it is necessary to use the story to appreciate the importance of every detail. And here it appears the fascinating history of this ancient city: Castulo becomes an immense source of stories, descriptions and interpretations. Archaeology is bound to interpretation, not only of physical evidence listed in the search, but primarily social and cultural context in which they occur. It’s quite a hermeneutics we find patterns of hermeneutic circle defined by Heidegger, Weber and Gadamer. Dilthey argued that the humanities need an understanding, to natural sciences, which require explanation.
In places where the monumentality is explicit, interpretation, hermeneutics makes the observer himself, with all its limitations profane, and the conclusion is summed up many times in the expression of a feeling (“How beautiful is this place!”) . However, in the enclaves where this monumentality is not as explicit, the interpretation is to be found in the hand of the archaeologist, which provides an explanation, which can stick exclusively to archaeological evidence pointing to a strictly descriptive way, or you can add to the physical and logical description, a story that interpret the cultural, economic, social, religious and even ecological context, in fact described the archaeological stands, that is, a story that becomes the telling of a story. The fascinating thing is to get to this point, the story of a story. And this is what happens in Castulo, both because the characteristics of the archaeological site require this, and the quality of the current team of archaeologists (integrated in the Forum MMX Project) as rapporteurs (s) history (s) of Castulo .
It is always interesting to know the logical conclusions from a finding (“It follows that”), but also an interpretation and attempt to understand the finding in a hermeneutical exercise occurs, a story that opens the doors of the imagination is created to understand by analogy. Knowing a description is intellectually rewarding, but try to understand what is described is fascinating.
A visit to Castulo, as already said, offers the possibility to know many stories, many stories. And this is the objective of Project Forum MMX, which is what has been called the current program of excavation and research in Castulo, which was launched in 2011. In the words of Marcelo Castro, archaeologist and director of the project, given the magnitude Enclave (almost seventy acres of a city several thousand years, almost all unexcavated), is to open windows at different times in the history of Castulo, to better understand its history. This objective, already ambitious, it becomes more important and singular when complemented with another aspiration: to involve the society in general and in particular that of Linares (near the enclave city), in the discovery of the hidden values Castulo locks, so the public perceive and feel as their own the site itself and everything related to it. 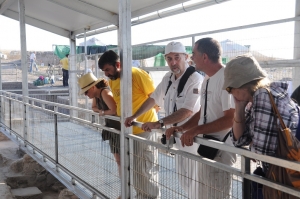 The involvement of society in the current  research project has been a success, and something completely unprecedented in the modern history of Spanish archeology.   To do this we have developed two types of initiatives: the admission of voluntary groups / as to help researchers in the field work and the Archaeological Museum of Linares (where all the material found in excavations is received), and continued attention of audience  that has gone to visit the excavations (only in 2014 attracted nearly 60,000 visitors). The result is that it is increasingly large number of people of Linares and other neighboring towns, sensitized to the importance of Castulo. Most striking is the mainstreaming of this interest, since it reaches people of very different level of education, professional level or age. 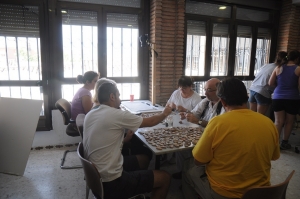 A key to achieve these results in the involvement of society Cástulo instrument has been the excellent work carried out by Marcelo Castro and his team, in the construction of stories, storytelling, in an attempt to understand the past and to involve the public in the attempt of understanding. The visitor who comes to Castulo, necessarily has to resort to the story, and finds the possibility of entering with imagination through the windows fields that are opening to the history of Castulo.
This narrative work is enhanced by the many volunteers that work form the beginning of the site in Castulo. There are currently three associations that bring people to the research in a selflessly support: they are the 28F Linares association, the association of residents of the nearby town of Ibros, and the New Acropolis association with volunteers from several spanish locations. But there are many students, neighbors from nearby towns and a youth summer camp from the  Andalusian Council , who also collaborate with the Forum MMX project. To stimulate the sensitivity and generosity of all these hundreds of people it has been also essential the use the story/narrative. What has driven so many people to devote their time to this form of cultural volunteering it has not been the project´s scientific arguments , or the relevance of Castulo as a potential engine for local economy hard hit by the economic crisis, but the intensity of the story told.
This narrative capacity has also transferred to new technologies, with spectacular results. For example, there has been a virtual reconstruction of what the city of Castulo and its surroundings would have been, in a 3D animation that can be viewed in the link https://www.youtube.com/watch?v=r_vcei0vD8c  Using virtual reality technology, it has  been designed a device that allows a virtual walk through a virtual Castulo´s recreation. Even at a strictly scientific level, a new system of classification of materials found in each profile excavated, allows to recreate the structures found and associated findings.
The researchers themselves say that stories are constantly subject to correction and amendment, because continuously there are appearing findings that may ratify them or not. We have a lively narration, evolving, making it more interesting if possible. By the summer of 2015 there are numerous stories and narrated historical interpretations, associated with the main findings. Here I quote the most important, not in order of importance, but in order of appearance before a visitor´s eyes.

The mosaic of Loves  was located inside a large building, which contains other mosaics of inferior quality, and it is believed to be a building to the imperial cult of Domitian, and possibly demolished because of damnatio memoriae which issued against him the senate. Great story.

In brief, the task  of public exposure  of the findings of the project Forum MMX in Castulo, highlights the importance of building a full account of the historical, social, economic and physical context for understanding the archaeological findings. This story goes beyond the description of the physical evidence to enable a logical deduction of the finding, and becomes quite an effort of understanding, a hermeneutic work, which also works with the imagination and analogy.