Notes on the relationship between the woodpecker and Mars

Mythological notes
The noun “Picus” or Pico(PEAK) is used for a Roman mythology god, for a mythical character and for the woodpecker, bird associated with Mars.

As a divinity, there are no clear references on its role and/or mythological relations. It could be a very old humanised divinity. According to Augustine of Hipona, Picus was a minor god linked to agriculture; Ovid also assigns Picus a cult, and relates it  to the theft of the rays of Jupiter by Numa.
In his human aspect, Picus is the king of the ausonios and father of Faun, but indirectly relates to Hermes and Mars, some versions affirm that Faun is a descendant of both divinities, thereby indicating membership into a same dynasty.

There is a Picus’ relationship with Mars, and there is due to his relationship with horses and his theriomorphism  as a bird; Picus becomes into  Picus Martius, an animal that with  the she-wolf, frames into the circle of Mars. This transformation was caused by the sorceress Circe, according to Ovid, jealous of Picus marrying Pomona. It´s because there is a love relationship between Picus and Circe, as told by Virgil.

Picus has an augural function, which comes in two ways; first, through its transformation into Picus Martius, Mars´ sacred woodpecker, which has the character of an augury bird, with a key role in the oracle of Tiona Matiene, sponsored by Mars. And the second way is through the identification of Picus, as a person with an augur, as described in some texts, and also by the description of a statue, carrying some objects of Mars with oracular power, as the lituus or augury cane and the ancile, the shield of the Salian.

There is a heroic trait in Picus, and it´s its civilizing character. In it appear, in harmony by opposition, the wild and the civilized; he is agrestis, inhabitant of the woods, a wild universe, like his son Faun, but also conducts civilizing facts, such as the creation of the kingdom of Laurentum and the dynasty which had its headquarters there, and it is also credited the foundation of Ausculum, whose first settlers were there from Sabina guided by a woodpecker, being the people of the Picentes. 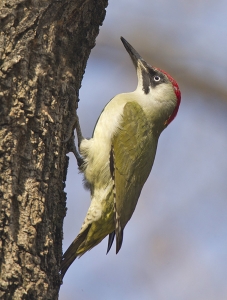 Biological notes
The woodpeckers group living in the Italian peninsula have different biological characteristics that may be behind its link to Mars. Do not forget that Mars, beyond its relationship with war, is the tutelary deity and protector of Rome and its archaic cult is also linked to agriculture.

Of all the species, there are two that reflect well the whole, the Green Woodpecker (Picus viridis) and Spotted Woodpecker (Dedrocopos major).

Among the colors of their plumage figure black, red and white, and in the case of Picus viridis, also green.

They are birds that live inside forests, protecting the trees (they feed on the larvae of wood-eating insects that damage the tree).
They have a very peculiar form of communication, which is the drumming, or rhythmic beating peak against the wood, at a speed of up to 12 strokes per second. This patter has different frequencies and intensities, which is capable of being used with different communications.

Its song is a kind of powerful neigh, reminiscent of the horses, and both the song and the drumming is heard more intensely when the atmosphere is charged with water, heralding rain, so they are birds that have popularly been associated with the announcement of storms and precipitation. In different locations in northern Spain they are known as Paxarón del agua o Pión del augua.

Finally, mention that its flight is sporadic and drawing curved paths.

Conclusions
There are evidences of the relationship of a character named Picus with Mars, and this character’s relationship with the woodpecker (Picus Martius).

The reasons why the woodpecker is associated with Mars, with oracular attributes can be in:
– The voice is a neigh, recalling the horse, which resound powerful from the deep of the forest background. The horse is an animal linked to Mars (the October Horse, Equus October, was sacrificed to Mars at the end of the agricultural and military season).
– The drumming is a sound that emerges from the forest background, capable of being interpreted.
– Both the song and the drumming rain can be preludes (fundamental factor for agriculture).
– Its diet is based on harmful larvae to trees, it gives a beneficial character. In addition, the larvae are extracted from the darkness of the galleries.
– His wavy, fast and sudden flight, showing black, white and red colors, could be susceptible of being interpreted.

Translation note: the original word teriomorfización was not found directly in the dictionary, this is the closer noun found.